Well, one thing is obvious. I don’t update this blog at the rate I had intended. I guess that is the story of most blogs. I’ll try to do better, as if people are actually reading any of this.

On February 26, I completed the 2012 Cowtown Marathon in Fort Worth, TX. Great experience. I’ll want to do this one again. 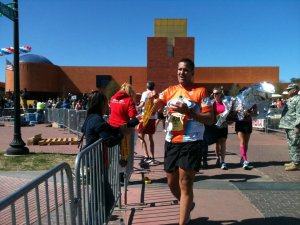 Getting that medal at The Cowtown Marathon

It was a beautiful, cool, sunny day. Yeah, I’d have been OK with cold, but I’ll take cool. The course was changed this year to be “35% less climb-y.” The first half of the marathon was basically the same as it was last year when I ran the half, so I guess most of the changes were on the second half. Therefore, I didn’t notice them.

I love the part of this race around mile 6 when you come into the stockyards. Nice visual, good crowd support.

Here is my result: 4:52:08. That is a PR, so I’m celebrating that. It was, however, 7 minutes short of my goal. That is OK. There are more marathons. My strategy was to hang with the 4:45 pace group. I did that (sort of) for 22 miles. I say “sort of,” because somehow I lost my pace group around mile 8. I thought I was ahead of them. I stopped to bathroom at 10, and asked a couple of bystanders to watch for my group in case they passed while I was in the bathroom. They didn’t Which I guess means they got to mile 10 before I did.

What to do? Well, I turned on RunKeeper so that I could monitor my pace, and then I began running faster than the pace group to catch up. I caught them around mile 13 or so. But from mile 10 to mile 13, I think I increased my pace too much. I paid for it later. It would have been better to take 7 or 8 miles to catch up. But my nervousness got the best of me. Lesson learned.

I felt really good at mile 20. I turned my music on and thought maybe I would finish well. Some time around 22, I just found it difficult to keep pace with my pace group leader. By this time, it was only him and me and one other guy anyway. I slowed, and I did some walking. The last 4 miles were just tough.

But I finished, and I finished with a new PR. I’m excited about that. 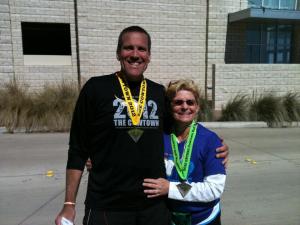 Me and my friend Liz, post finish. We did it!

Here is the rest of the marathon schedule as planned for this year:
April 29 Oklahoma City Memorial Marathon
July 29 San Francisco Marathon
October 7 Chicago Marathon
(I’m already registered and paid for these marathons).
December something or other – Dallas White Rock Marathon.

Elaine, Liz, Me back at the best BnB in Fort Worth - Miller House!

I’m changing my training schedule for these 8 weeks leading up to Oklahoma City. I’ll make a post about that. I’ll know in late April if my plan worked. I will set the same goal for Oklahoma City that I had for Cowtown – 4:45 or less.